Last summer, my friend Eric and I wanted to embed a citation graph. However, the existing Python implementations of node2vec are quite slow. I coded a faster version using numba which was good enough.

Can we make it even faster using mathematics?

The current version of the code works really well and is available on github.

node2vec is a famous technique to embed nodes of any (un)directed, (un)weighted network by stating a node should have an embedding reflecting its neighborhood.

It applies another famous technique from the field of natural language processing, the skip-gram model. Using this technique to produce word vectors is now referred to as word2vec.

To implement node2vec, one simply has to generate neighborhoods and plug them into an implementation of skip-gram word2vec, the most popular being gensim.

node2vec defines neighborhoods as biased random walks. Starting from a node, one produces a random walk by repeatedly sampling a neighbor of the last visited node.

The walk is biased using two parameters $p$ and $q$. 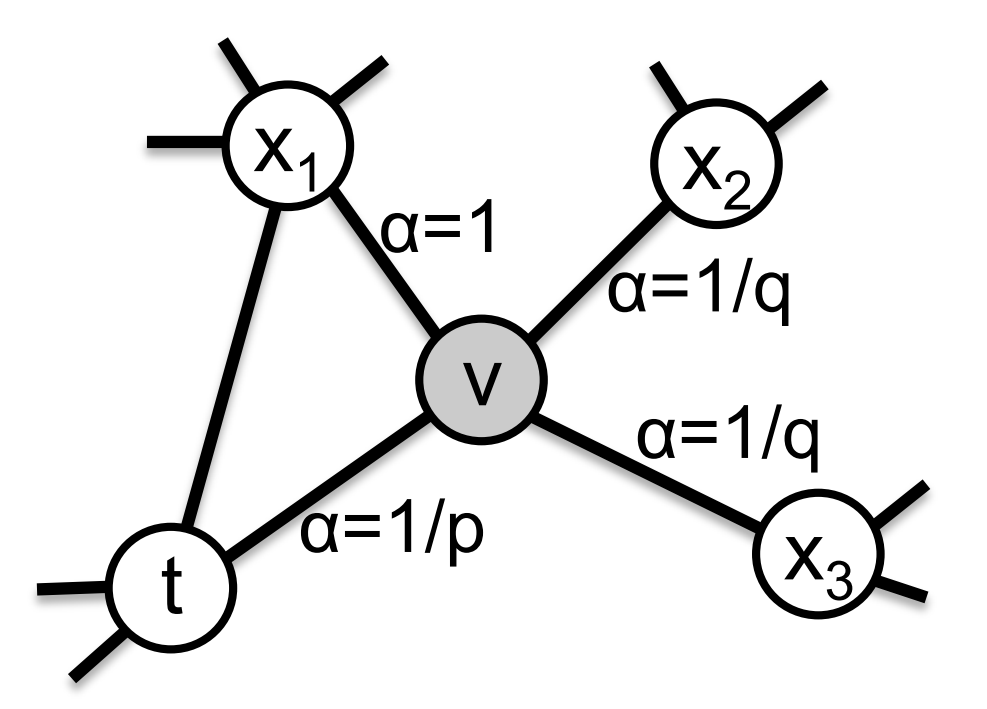 The problem of the above approach is that the transition probabilities depend on the two last visited nodes. The authors suggest to store them for every such pair first, which approximately multiplies the space complexity by the average degree $\bar d$. If you do, you can sample in $\mathcal{O}(1)$ (using the Alias method), else you can compute the probabilities on the fly in $\mathcal{O}(\bar d)$ (by merging sorted adjacency lists). Thus, if you only do one pass, there is a clear space advantage to do the computation on the fly!

In some cases, the sampling can be much faster: if the graph is unweighted and $p=q=1$, one can just sample any neighbor in $\mathcal{O}(1)$. Isn’t it surprising that changing these parameters a little bit messes up the whole complexity?

Let’s consider a simpler problem with an urn containing $b$ blue balls and $r$ red balls.

If we sample one ball uniformly, the probability to get a blue one is $\frac{b}{b+r}$.

If we cannot remove half of the red balls, we could still paint half of them in white. When we draw a white ball, we can ignore it.

Instead of painting half of the red balls in white, we could also paint one half of each red balls in white. When drawing a mixed color ball, we can randomly select one of its colors and suppose the whole ball has this color. This is the idea of rejection sampling.

The figure below summarizes the method:

The downside of this method is that you might have to try multiple times if the red zone is too big.

If you want to know more about related techniques to sample discrete random variables (like the alias method), I recommend you to read this awesome essay: Darts, Dice, and Coins: Sampling from a Discrete Distribution.

Back to our problem

In our case, we have nodes with different weights, but it is costly to compute or store all of them, hence we are going to apply rejection sampling.

Changing our notations, the original probability distribution is (up to a constant)

and we want to transform it into

Hence, the algorithm is simply:

What is the complexity?

Step 1 costs $\mathcal{O}(1)$ with the alias method (see the essay above), or $\mathcal{O}(\log \bar d)$ with binary search and no additional memory.

How many times are they repeated? In other terms, how big is the red area?

The average complexity of this algorithm is thus $\mathcal{O}\left(\frac{\log \bar d}{p}\right) < \mathcal{O}(4 \cdot \log \bar d)$. In theory, one could get rid of the asymptotic $\log \bar d$ factor but at the cost of a larger constant factor.

Below is the full code to generate one walk and accelerate the code with numba. The only abstractions I made for the sake of clarity are random_neighbor that samples a random neighbor according to the graph weights and is_neighbor that tests whether two nodes share an edge.

Using rejection sampling, one can implement biased random walks for node2vec in logarithmic (or even constant) instead of linear time without additional memory or precomputation.

This improvement is a bit overkill in practice: the average degree $\bar d$ typically ranges between 20 and 100. The naive implementation (which computes all transition probabilities at every step) already runs much faster than gensim’s word2vec when implemented in numba, but rejection sampling makes it even faster.

It was fun anyway to find an application of randomized algorithms in machine learning!

Other nice features of fastnode2vec are distributing the random walk generation accross gensim threads and providing a CLI. I recommend you to try it!